How To Design The Uber Backend System And APIs 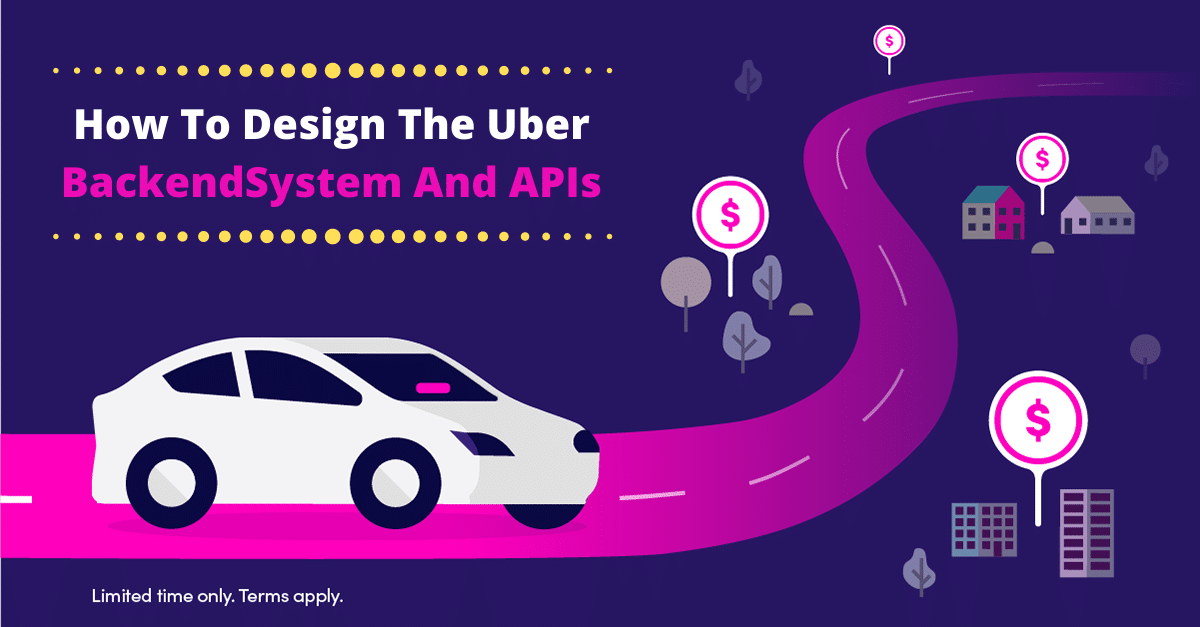 In this article, you’ll learn How to design the Uber Backend System and APIs: The System Designing of Uber Application 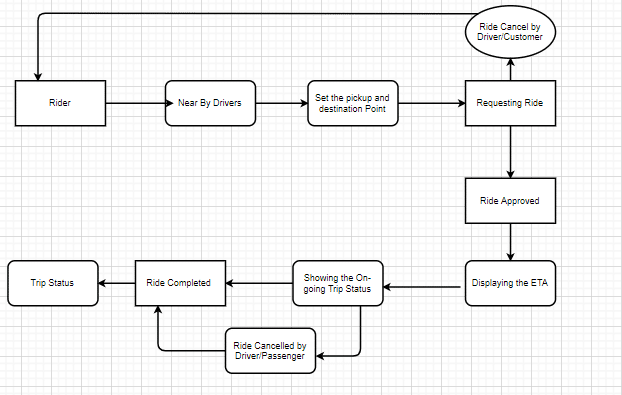 How  Dispatch system works completely on map our location data

What is the role of the ETA and how can it can be checked: 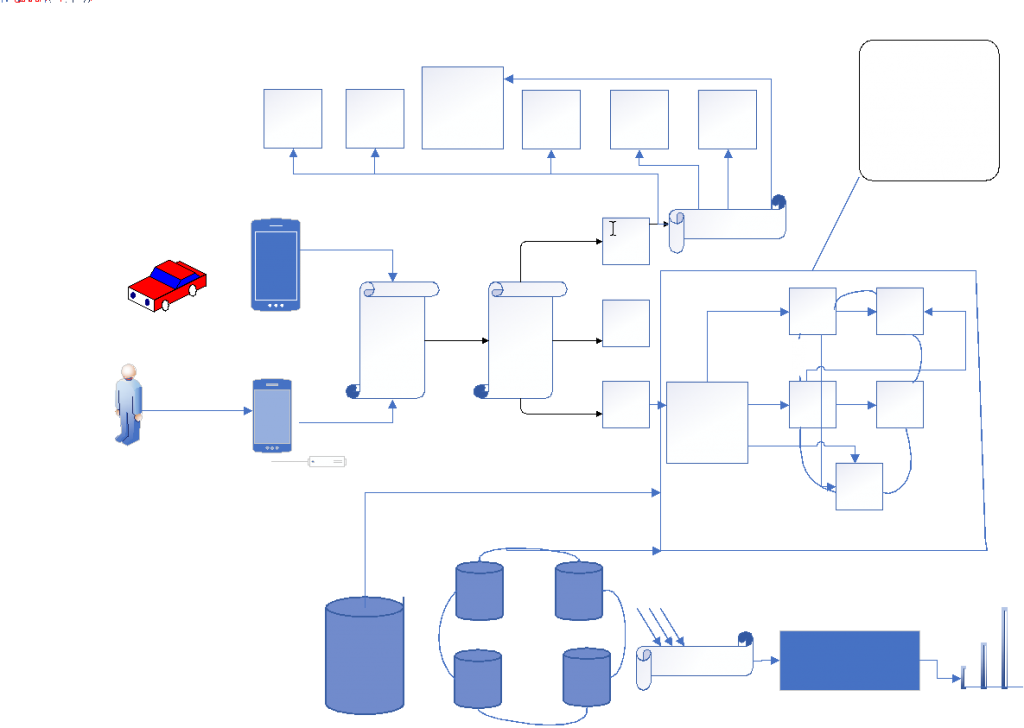 Explanation of the Functionality of Each Component:

While jumping into the system design, first understand all the components which are needed to understand the Producer/Consumer(Supply/Demand) part and the dispatch optimization component.

Kafka rest APIs will provide the endpoint to consume all the location data for every Cab. If for example we have thousands of Cabs running for the city and in every 4 seconds, cabs are sending their location data, that means in every four seconds, Uber backend system will be having thousand hits or thousand location point being sent to the  Kafka API.

And that data will be buffered and put it to a Kaka and then they were consumed two different confidence of Big data layer and then a copy of it will be saved to NoSQL DB. When the Ride/trip is happening, and the latest location will be sent to the dispatcher component to keep the state machine updated.

We also have other rest APIs and I will explain these components also. Here the important component is WebSocketand why do we need WebSocket?

Unless like normal HTTP requests, WebSocket is really helpful in these kinds of applications because we need an asynchronous way of sending messages from client to the server and server to the client at any given part of the time. That means that we should have a Connection established between the Cab Service to the server or from the user service to the server. What happens is web WebSocketkeeps the connection open to all of the applications and based on changes happens in the dispatch system or any component in the server, then the data will be exchanged to and fro between the application and the server.

Since the Producer-Consumer(Supply-Demand) and the WebSocket component of are mainly written in node.js as NodeJS is really good in asynchronous messaging and small messaging and also it is an event-driven framework.

So,  now I am explaining how the dispatch system works the uber dispatch system is built usingnode.js.The advantage of using node.js either asynchronously event-driven framework. So, the server can push the message or send a message to the application whenever it wants.

Now the next question is how do we scale these servers inside the DISCO component? To scale this, uber uses something called repo it has below functionalities

Why do we need in Gossip protocol?

How ETAs are Calculated:

For ETA calculation, we can divide this into two major components:

The main thing to imagine here is to convert any map into a geographical representation so where each intersection is a vertex and each road segment connecting two vertices is an edge. Then we can employ any routing algorithm like Distance Vector or Link state to find the shortest path between source and destination. But as we also know that to find the shortest distance it will take us O(n log n) run time complexity so this means the larger the end the longer it will take us to find out the shortest distance between two points.

Here, what we can do is to partition the entire graph and precompute the best path within those partitions which significantly brings out the runtime complexity. Once we have the most optimal path to go from point X to point Y, we can use the current traffic information to calculate the ETA which can be influenced by the time of the day or where the conditions or any concerts of gatherings happening at that particular moment which will be influencing the time. it will take for the driver to get from point X to point Y just like by adding the weights on these edges based on that traffic condition.

Now Passenger is happy as his ride is broken down and he got an ETA for the driver to arrive so now let’s dive deeper into the on-trip component. This is the part where the driver presses the “start ride”button and the back end system is tracking the trip’s current location. So, we have a message broker that listens to all the events sent by the drivers through Uber app. We can use any message broker service here like Apache Kafka, EWS kinases,Microsoft event Hub, Google pub/sub etc. We can use Kafka streams here for our design because it is open source and  cost-effective as it doesn’t charge on the number of messages in the channel.

Once the trip location is sent to Kafka stream, then it gets forwarded to the Trip recorder service which takes it and writes it on to a location store (Any NoSQL DB like Mongo DB). We can use Cassandra as it is highly scalable as you can keep on adding more machine nodes and keep on storing data. Since we don’t want to lose trip details because of the hosts’ failure.

Below are the various Machine Learning Models using which we can optimize the ETA calculation process which will give near accurate ETA.

Coming to the database part, actually, the earlier users used to use a DBMS that is the Postgresql  database for operations. They used to save driver/passenger profile information, they used to save GPS points for everything in a DBMS. It couldn’t scale as Uber rolled out service in different cities and then they talked about a new NoSQL kind of database that is built on top of MySQL and it is called schema-less.

When they are building this database below are the points they considered:

Use of Analytics in Uber System:

Challenges need to be Considered:

In a Slow network or intermittent disconnecting network scenario, how will the passenger be able to use the Uber app uninterrupted?

In the middle of the trip, if the network gets disconnected then in that case how to handle the billing for that passenger?

Here, in this blog, I have explained the system designing of the Uber backend. Also explained about the microservices architecture that Uber is leveraging upon to build the backend APIs communicating with each other in a distributed system.

Maria and Brian share their experience about working with us. It all started with an idea to build a custom CRM for their business.Read More END_OF_DOCUMENT_TOKEN_TO_BE_REPLACED

Mike is a professional speaker. He visited our office in Ahmedabad, India and his appreciation about our quality of IT services means a lot to us. Thanks Mike!Read More END_OF_DOCUMENT_TOKEN_TO_BE_REPLACED

Robert is from Scotland, UK. He is with us for more than a year now.He has graciously shared his feedback about our array of offeringsRead More END_OF_DOCUMENT_TOKEN_TO_BE_REPLACED